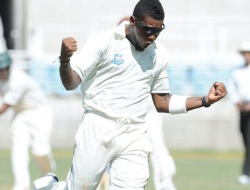 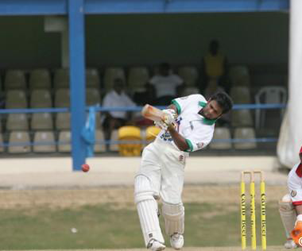 HAVING chalked up back to back victories over Leeward Islands Hurricanes and Windward Islands Volcanoes, the Guyana Jaguars will be looking to make it three out of three when they oppose Barbados Pride in the third round of the West Indies Cricket Board/Professional Cricket League Regional 4-Day tournament at the Guyana National Stadium, Providence from 09:30hrs.

The home team will be contesting this fixture without the services of skipper Leon Johnson and his deputy in opener Assad Fudadin and dependable middle order batsman Shivnarine Chanderpaul, who will all be departing these shores tomorrow for West Indies duties in South Africa.

While the 40 year old Chanderpaul has quietly gone about his business, scoring 45 against the Hurricanes and 62 and 44 against the Volcanoes, it has been the individual brilliance of Deonarine with the bat and his Albion Cricket Club teammate Veerasammy Permaul that has stood out.

Deonarine has stood head and shoulders above the Jaguars batsmen, chalking up scores of 110*, 139 and 34 in his three innings for a total of 283 runs at an average of 141.50 holding the Jaguars’ middle order together with Chanderpaul.

No doubt, Singh would be looking for the same support the players give to Johnson, as he intends to go out there and do his best and with a lineup that includes teenaged openers in Tagenarine Chanderpaul and Shimron Hetmyer, along with Trevon Griffith and Rajendra Chandrika, Guyana Jaguars’ selection panel would have a tough time selecting their final 11.

Deonarine will continue to bat at four, with Singh coming at number three, while in the absence of Chanderpaul, Christopher Barnwell can step up to the plate and shoulder the responsibility of the middle and lower order, along with Raymon Reifer and Anthony Bramble.

Spin twins Permaul and Devendra Bishoo will handle that department with worthy support from Deonarine who snared five first innings victims against the Volcanoes after chalking up a ton, while Ronsford Beaton will handle the new ball.

Unlike the first two games when the military medium of Barnwell and Reifer were used sparingly with Beaton, this time around, the lively Keon Joseph, who as an Under-19 fast bowler was the talk of the town, will look to redeem himself as a senior player, offering double dose of pace to the Pride batsmen.

Both teams will be keeping a keen eye on the weather, especially the Bajans, who saw three days in their second round clash with the Jamaicans being abandoned due to a soggy outfield at the Windwards ground in St. Phillip, which had water lodged in some areas.

They can take some consolation knowing that the Guyana National Stadium is one of the fastest drying venues in this part of the world and as was evident in the last round against the Volcanoes, all that is needed is the rain to stop and play will commence within 30 minutes or the given time period by the match officials.

Nandkumar Shivsankar and Patrick Gustard will call play in this fixture, with Colin Alfred as the third official and Reon King the Match Referee and the final 11 for both sides will be chosen from: