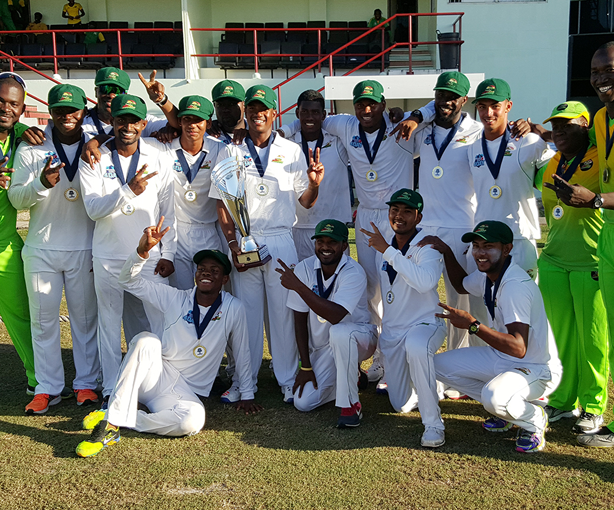 THE spin mantra clicked. Left-arm spinner Veerasammy Permaul (5-36) and leg-spinner Devendra Bishoo (3-43), tied the Jamaica Scorpions batsmen up in knots to steer Guyana Jaguars to an innings and 54- run win in the final round of the West Indies Cricket Board’s Professional Cricket League (PCL) Four-Day game at the National Stadium, Providence, yesterday.After following on, the Scorpions were skittled out for 134 with the spin duo collecting eight second innings wickets between them with the end coming just over an hour after tea.

The Guyana Jaguars entered the final round facing a must-win situation, and after almost three days of competitive cricket they were able to successfully defend their title.

Facing a daunting test after following on on 189, the Jamaican batsmen never provided the stamina required in such a situation and folded in just 50 overs.

Andre McCarthy top scored with 21, with no other batsman managing to pass 20. Damion Jacobs (17), Devon Thomas (17), Jermaine Blackwood (16), Dennis Bullii (15), Shacaya Thomas (12) and John Campbell (10) were the other batsmen to reach double figures.

Medium pacers Raymon Reifer and Christopher Barnwell had one second innings wicket each to set the tone for the spin duo.

Earlier, the Jamaica Scorpions fell short of the follow-on target of 271 runs by 40 and were forced to follow on after they were bowled out on the stroke of lunch.

Wily left-arm spinner Gudakesh Motie, who was the star performer late on day two, inflicted more misery on the hapless Scorpions when he bowled overnight batsman Devon Thomas for 43.

Jacobs joined forces with Aldaine Thomas and put together 31 runs before Barnwell bowled Jacobs for 19.

The dismissal dented any hopes of the visitors saving the follow-on as Permaul removed Thomas (45) and Bulli (2) in quick succession before Bishoo claimed the final wicket of Gavon Brown for four.

And in the other two matches, Barbados Pride beat Leeward Islands Hurricanes by an innings and 93 runs.