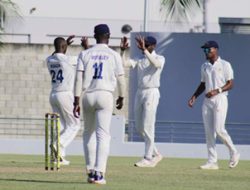 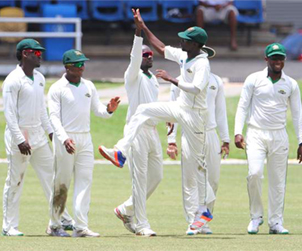 The long-serving Scorpions pacer ended with 5-75 from 22.1 overs – the first time he has taken five in a first-class innings – and the Hurricanes were bowled out for 183 in their second innings about an hour before lunch on the final day of eighth round matches in the Championship.

Green formalised the result, when he had tail-ender Jeremiah Louis caught at extra cover for 29 from a mistimed pull at a short, rising ball.

The result meant that the Scorpions have now moved into a two-way tie for third with five-time defending champions Guyana Jaguars on 91.8 points.

Starting the day on 134 for six, Hurricanes suffered an early setback, when experienced opener Montcin Hodge was caught behind off Green for the top score of 61, nibbling outside the off-stump, after adding just one to his overnight score.

Marquino Mindley trapped West Indies pacer Alzarri Joseph lbw for a duck in the following over, playing across the line, and three overs later, Green had Hayden Walsh Jr caught at first slip for 35 to continue the slide.

Hurricanes were 154 for nine, and Louis indulged himself towards the end before Green cleaned him up to bring the match to a close and the Scorpions complete the season sweep.

On Saturday, leaders Barbados Pride brushed aside the Jaguars by 235 runs to extend their lead at the top of the table to 43 points, after Trinidad & Tobago Red Force crushed Windward Islands Volcanoes by an innings and 84 runs to move into second on 91.8 points.

Following this round of matches, CWI has suspended the season because of the growing threat of the global coronavirus pandemic.