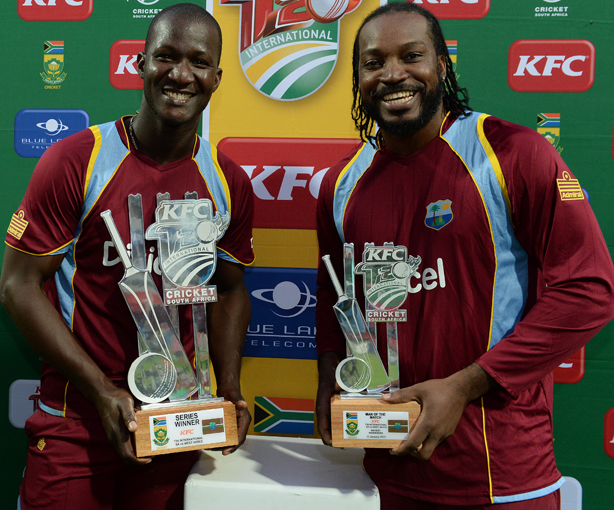 The Wanderers is home to what it calls the greatest ODI of all time – the 438 game – and now it is also home to what could become known as the most thrilling T20: the 236 game. West Indies pulled off the highest successful run chase in the shortest format, propelled by Chris Gayle’s 90 off 41 balls, held together by Marlon Samuels’ seventh T20 half-century and finished by Darren Sammy, who led his side to a series win with a game to spare.

South Africa could be forgiven for being shell-shocked. They would have thought their chances of squaring the series were strong after Faf du Plessis became the second South African to score a T20 hundred, helping them post their second-highest score in the format, and with the knowledge they had never lost a T20 defending a 180-plus score before.

There was one man who could change that and change it he did. Gayle scored his only international T20 century at the Wanderers – against South Africa in 2007 – and seemed set to bring up his second with a bruising batting performance. He could not quite repeat the feat but his team-mates ensured his efforts did not go to waste.

It began in the third over, after West Indies got off to the start they needed but lost Dwayne Smith, who drove down the wrong line to a full, straight, Marchant de Lange delivery. Gayle faced a situation he relished: his team needed quick runs and aggression, someone who was willing to take on the bowlers no matter where they landed the ball.

Luckily for Gayle, Kyle Abbott insisted on going full – perhaps after seeing what happened to West Indies’ bowlers, who erred by doing the opposite – and presented five full tosses in succession. Gayle let the first one go, took four fours off the rest and when Abbott held his length back to end the over, carted him over deep midwicket for six.

Twenty-two runs came off that over and it was the sign everything was going to go. The next three overs cost 46 as David Wiese and de Lange also searched for the yorker but ended up offering runs. West Indies scored the second-highest number of runs in the Powerplay, 86, and Samuels CASHED in as well.

Aaron Phangiso and Imran Tahir bowled the first two overs that did not go for double figures but even their luck was short-lived. After Gayle brought up his fifty off 20 balls – three slower than at Newlands on Friday night – with a six off Tahir, he grew even more hungry. Phangiso was hit to the grass embankment, Tahir to the top tier of the stand and Justin Ontong, turned to perhaps because du Plessis had run out of options, flat out of the ground. While Samuels played a supporting role, the second-wicket stand grew to 152 off 11.5 overs.

The required run rate was whittled down to under 10 runs an over when Tahir bowled the first boundary-less over of the innings and the pressure started to mount again. Gayle was desperate to see his team through and went after Wiese but the bowler took pace off the ball and had the Jamaican caught behind.

That was where it could have all gone wrong for West Indies. On Friday, they lost five for 50 when Gayle departed and this time they threatened to unravel similarly. Tahir had another tight over, with just five runs coming from it, then Samuels holed out and Kieron Pollard was also deceived by a slower ball. Andre Russell and Dwayne Bravo enjoyed two big hits each and fell attempting a third but the important thing was that even as wickets fell, West Indies kept adding runs.

When Darren Sammy joined Denesh Ramdin, West Indies needed 23 off 14 balls – which set the scene for the captain to play a knock like the ones he had in the World T20. He kept his cool while neither Abbott nor de Lange held theirs and secured the victory with four balls to spare.

South Africa would not have expected that after they were treated to a show by their own leader. Du Plessis was called on in yet another mini-crisis, after the first two wickets went cheaply, and was joined by David Miller, promoted to No. 4. They posted 105 runs for the third wicket at a run rate of 12.85 – a fraction more than the Gayle-Samuels stand of 12.84 – and took advantage of a West Indies attack who could not find their lengths.

Sulieman Benn was either too full or too short and Sheldon Cottrell offered too many low full tosses. Their stand could have grown into something of even more substance but Miller was run out thanks to good footwork from Russell before he could reach a half-century, leaving du Plessis on his own. The middle order did not contribute enough around the captain’s hundred, which came off 46 balls, one more than Richard Levi’s record in T20 internationals. In the end, he would probably have taken less if he could have enjoyed what West Indies did.