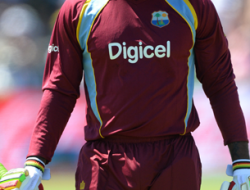 Jamaica Cricket Association (JCA) CEO Courtney Francis believes that having two cricketers nominated for the RJR Sports Foundation 2016 National Sportsman and Sportswoman of the Year awards is already a victory in itself for the sport.

Chris Gayle was the last cricketer to lift the accolade in 2010, and although Francis says that it will be difficult for either Stafanie Taylor, who is nominated for the sportswoman award, or Marlon Samuels – a Sportsman of the Year nominee – to repeat the feat this year because of the prominence of track and field athletes on the list, he says that their nomination is itself a win for the JCA. The administrator also emphasized that the nominations are an indication that local cricket continues to play an important role on the domestic sporting landscape.

“It’s (nomination) very significant to the Jamaica Cricket Association because we are only second to track and field in nomination. Of the eight persons nominated, it’s only from track and field, cricket, and swimming, and cricket and track and field span both male and female, which means cricket is still a big part of our culture, and it still plays a major role in the sporting landscape of our nation,” Francis told The Gleaner.

He continued that Taylor is as deserving of the award as any Olympian and that she will receive it one day, if not this year, while pointing to Samuels’ talismanic performance in West Indies winning back-to-back World Cup tournaments.

“Stafanie Taylor is exceptional, and we feel it’s a matter of time before she is crowned with all the accolades of the highest order in this country. Stafanie’s achievement is global. Also she has been named captain of the world team, and that is something you cannot surpass. We may be biased towards Olympics, but she is as equal in our eyes as any Olympian who took on the world and became number one.

“Marlon has played a significant role in international cricket. We have won two World Cups and he was named man of the match, and while the criteria are set out for performance over the previous year only, he was very significant to West Indies winning the World Cup. But we can appreciate that the Olympics was held this year, so we believe that it (chance of winning) is 60-40,” Francis stated.

Francis admitted that track and field is the king of Jamaican sports at this points and that it’s impact on the nation cannot be easily overlooked.

“We are not fooled to take away from that, because they (track and field athletes) have impacted not just the sport, but the nation, so their impact is more significant than Marlon’s performance at the World Cup,” said Francis. “But we are keeping our fingers crossed. We are not going to be disappointed. Cricket has already won by having two persons short-listed. We consider that a victory, and if any of those persons are selected, it would top it off for us, but to be nominated is a victory for cricket in itself.”

Vivalyn Latty-Scott (1976) is the only cricketer to have won the Sportswoman of the Year award.