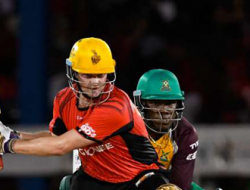 The young cricketer received his maiden call-up on Wednesday and could debut in the second Test against India in Jamaica.

“I thought they were just delaying the inevitable, but I am happy to say the least (because) the guys is a hard worker and when I started working with him I had sent out a message to every young Antiguan who wants to train on a Saturday morning and it was an hour and a half for free to every single one,” he said.

“He showed up and from since then, we have been working together for a long while. He learns fast and it’s a testimony that hard work does pay off most times.”

Benjamin, who hails from All Saints, said his only concern is that the youngster is not shouldered with too much responsibility too soon.

“There’s going to be a lot expected of him but I’ll try to keep in touch and try to speak to him on a regular basis, letting him understand that he might get thrown into the deep end. I have asked the people involved to throw him into the deep end, but keep the world off his foot and don’t expect no five-five wicket hauls and so forth; it takes time,” he said.