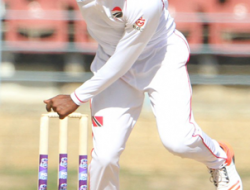 “The situation in Australia, where there are indications that some of Australia’s best players could be lost to international cricket, highlights the need for a better international structure in which international cricket and domestic T20 leagues (most of which are in any event owned by the Boards) can co-exist”, said Tony Irish, Executive Chairman of FICA. “FICA has been advocating for an improved global structure for some time.”

“In a better global cricket structure, which includes proper competition structures for the three formats of the game, we also believe some form of global regulatory framework agreed with the players and their representatives would be a positive. We have flagged with the ICC, and Boards with whom we engage, the co-development of a framework that would protect both the game and the players, and balance the interest of international cricket with T20 Leagues.”

“As it stands, the ICC does have some existing regulations on the provision of ‘No Objection Certificates’ to players who wish to play in a domestic T20 league. These however were not specifically agreed with the players, and, given where the game now stands, we think a new framework is required. To the extent that a Board might now attempt to rely on existing ICC regulations to restrict players who are not contracted from playing in domestic T20 leagues, FICA believes that would be open to legal challenge in most jurisdictions as a restraint of trade.”

“FICA stands for fundamental rights of players to freedom of movement and for players to play where they are valued. Because of the way the game is structured, there is more than one market open to players. It would be patently unfair not to allow a player to compete in one market, when he or she is not employed in the other. FICA will support appropriate player challenges to country Boards that attempt to prevent players from earning a living in markets where they are valued.”

“Both international cricket and the T20 leagues are important to the overall game. We simply have to find a way to balance an improved form of international cricket with the leagues. We think this is possible with genuine will and co-operation and we look forward to continuing to work with the ICC and Boards on this.
-ENDS-