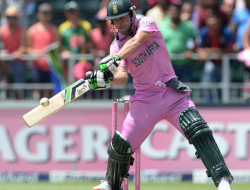 The 33-year-old seamer finished with five for 56 to help reduce Jamaica to 215 all out off 49.1 overs, crippling their pursuit of 233 for victory at Queen’s Park Oval.

Opener Nkrumah Bonner stroked 51 at the top of the order, Dave Bernard Jr got 40 and Andre McCarthy, 37, while John Campbell hit 26.

Seamer Kevon Cooper chipped in with three for 34 to support Emrit.

Earlier, T&T were guided to 232 all out off 49.3 overs by Darren Bravo’s 55, with support coming from his West Indies teammate Kieron Pollard with 41.

The victory followed on from Friday’s five-wicket victory over West Indies Under-19s.

Sent in, Red Force lost the attacking Evin Lewis cheaply for five in the fourth over with the score on eight and required Darren Bravo’s half-century to provide stability.

He hit eight fours and a six off 82 deliveries, adding 34 for the second wicket with opener Nicholas Sookdeosingh (19) and 31 for the third wicket with Jason Mohammed (6).

Miller struck, prising out Sookdeosingh and Mohammed while Darren Bravo fell to leg-spinner Damion Jacobs to leave Red Force on 105 for four in the 26th over, but the experienced Dwayne Bravo and Pollard came together in a positive 58-run, fifth wicket partnership to steady the innings.

However, once Dwayne Bravo was lbw to Bernard in the 39th over, the last six wickets crashed for 69 runs.

Jamaica then seemed favourites for the win when Bonner and Campbell put on 45 for the first wicket but Emrit struck three telling blows – two in the first over of his spell – to reduce the visitors to 118 for five in the 31st over.

He first had Campbell caught at the wicket prodding forward to the second ball and two deliveries later, had captain Tamar Lambert taken at slip by Dwayne Bravo without scoring.

Bonner and Test batsman Jermaine Blackwood (14) added 43 for the third wicket to defy the Trinidadians until Emrit struck again in his sixth over, claiming Blackwood bowled off the inside edge in the 21st over.

Three wickets tumbled for 30 runs until McCarthy and Bernard posted 48 for the sixth wicket to prop up the innings and once again leave the game an open affair.

However, McCarthy top edged a cut behind off Cooper to set off a slide where the last five wickets fell for 51 runs.

Bernard was still there at the start of the final over with Jamaica needing 18 to win but was bowled off the first ball by Dwayne Bravo, as he looked to improvise.