Emerging Players Hard At Work, Enjoying Time “In The Middle” 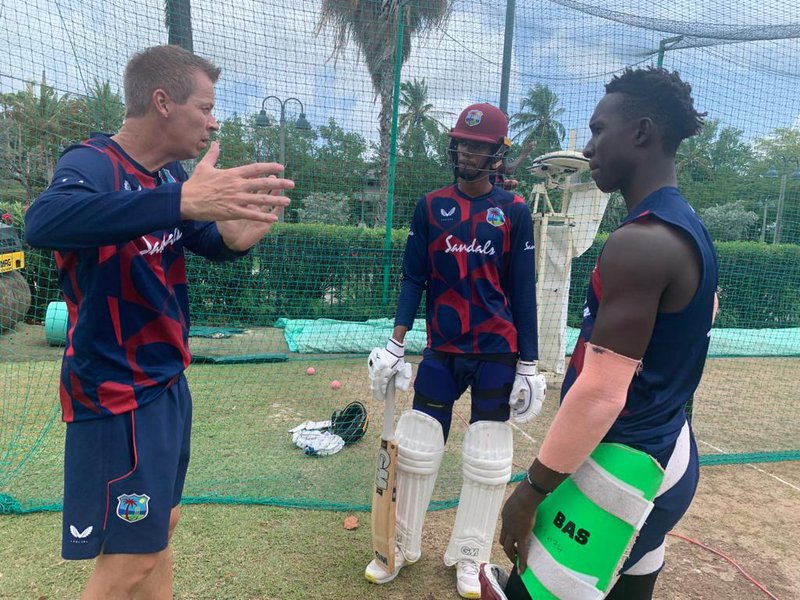 The West Indies Emerging Players have started their intense work programme and have already seen benefit from their training time at the Coolidge Cricket Ground (CCG). Graeme West, CWI’s High Performance Manager, has indicated that the players have all expressed great enjoyment a week into the programme and he is also seeing this manifested in the way they go about their sessions.

“It has been really encouraging to see the energy and enthusiasm of all the players. They are keen to improve their game as they recognize this is a really good opportunity for them. All the coaching staff have been really impressed with the ability to listen and take on board the ideas, and reinforce some of the things they would have come across before having been involved in West Indies U19 programmes, some with the first-class franchises, some with CPL franchises from before. It is a young group, but they are experienced,” West told CWI Media. “We have had a really, encouraging, positive start. We have brought together a group of player, where many have been together before. In terms of their recent experiences, a couple have flown in from the UK where they were playing club cricket, several were involved in first-class cricket in Trinidad, and several have been going to the USA to play T20 cricket there. So, we are bringing them to gather as a group and we have a lot lined up for them here at CCG.”

West added that the players have been going through their drills with great professionalism and this has led to great camaraderie. The plan for a CWI Emerging Players Academy was first announced in March. It is a nexus between regional junior and senior teams while supporting the development of talented players between the ages of 19 and 25. The Academy will have five primary objectives:

The 15 players were picked after the Selection Panel met and made recommendations on a formula which included consultations with each of the six Territorial Boards. This first Emerging Players camp has several objectives and the main focus during the initial period will be to ensure the management of talent; players’ personal development – especially creating a breeding ground for leaders in the game; accelerating development – reinforcing the importance of knowledge on the physical components; as well as increasing the readiness of the players for the international stage – with a focus on specific skill sets identified by the Head Coach of the Senior Team.