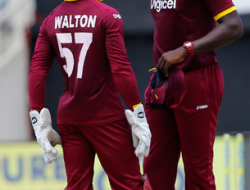 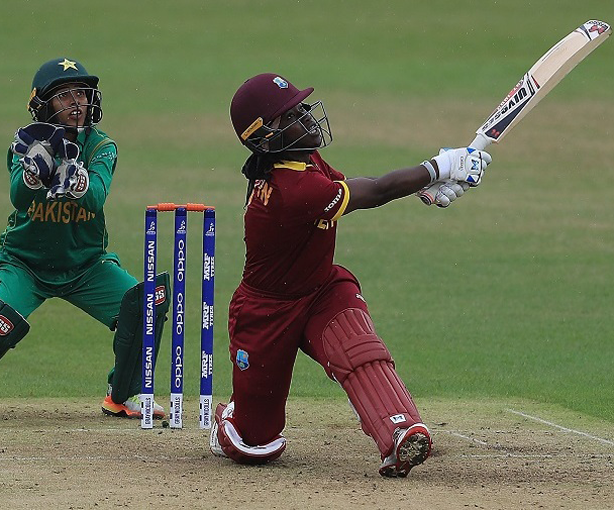 Deandra Dottin‘s first ODI century lifted West Indies to 285 and did half the job against Pakistan, a team that hadn’t made more than 150 for four innings in a row. And although Pakistan put up a solid response, a combination of rain and quick wickets meant their innings was cut short on 117 for 3 – 19 short of the DLS par score in 24 overs. It was their 13th successive loss in a World Cup match.

Pakistan’s revised target was 245 in 38 overs and Javeria Khanwas unbeaten on 58 when rain interrupted the game for a third time. She added 80 with opener Nahida Khan before offspinner Anisa Mohammed dismissed the opener for 40. Thirteen balls later, Iram Javed, promoted ahead of Nain Abidi, holed out to extra cover off what turned out to be the last ball of the match.

It meant that the fluent stand between Javeria and Nahida, that kept Pakistan close to the DLS par score, went in vain. Pakistan captain Sana Mir admitted to a “lapse” in planning after the match, with the side preferring not to take the batting Powerplay when the drizzle started getting heavy.

Earlier, rain had delayed the start of the game by an hour. Stafanie Taylor, who had lost the toss, found herself out in the middle after the end of the first over. Having hustled the openers by utilising the overcast conditions with a couple of swinging deliveries, seamer Asmavia Iqbal floated up an offcutter and had Hayley Matthews chipping a return catch.

The left-handed Kycia Knight then threatened to monopolise the cover boundary, striking four dominant boundaries through the off-side belt. But Asmavia was back with another cutter, this one climbing away from Knight whose aimless prod outside off resulted in a outside edge that was smartly taken by Sidra Nawaz low to her left. Asmavia even ventured up the pitch to make the wicket a memorable one – shouting out a clear send-off to the perplexed batsman. By the time Pakistan captain Mir offered her an apologetic pat, she was an amused batsman. But one who was out, nonetheless.

Chedean Nation joined her captain in the fifth over. West Indies continued to find the boundary regularly – at one point, 48 of the 63 runs had come in fours – to offset an otherwise tight bowling display from Pakistan. Taylor channeled Knight and was particularly punishing through the off side. She made most of the 87 runs the pair put on for the third wicket before Nation, who has faced some criticism for throwing away starts this tournament, walked across and exposed her middle stump in a bid to sweep. She would be Nashra Sandhu’s only wicket.

When Taylor brought up her fifty, it was West Indies’ first of the tournament. There wasn’t a deliberate attempt to accelerate after she reached the landmark. The priority, it seemed, was to build a long innings and take an otherwise fragile batting line-up as deep into the innings as possible. Her own innings pushed into the 40th over, before an attempted drill past Diana Baig was caught by the bowler in her follow through. She missed out on a sixth ODI hundred by ten runs.

The acceleration came from Dottin who, in the mid-innings break, acknowledged that she had looked to play straighter. With five fours and a six, she brought up her fifty off 49 balls in the 42nd over. And from there began West Indies’ acceleration. Seventy-four runs came off the last seven overs; 54 of those were pummeled from Dottin’s bat in just 27 balls, including a six that came from a launch over long-on to bring up a 71-ball hundred. She celebrated by flinging her bat to square leg – like someone who should have had a first hundred long before her 99th ODI innings.