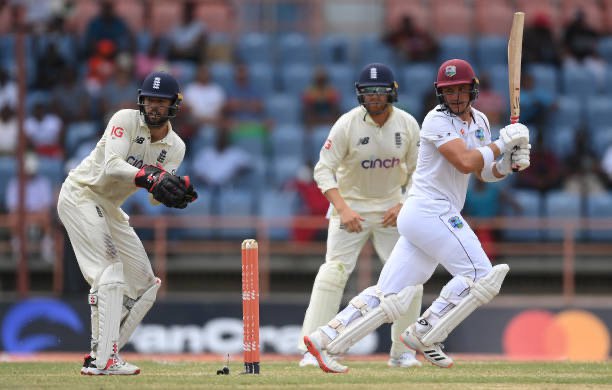 Joshua Da Silva’s composed, unbeaten half-century pulled West Indies out of a deep trouble and earned them a vital first innings lead, as the home side produced a brilliant fightback against England in this all important third  and final Test match on Friday.

Chasing England’s 204, West Indies slipped to 95-6 half hour before tea and were in danger of being bundled out. However, Da Silva mustered all the courage and skill he could find and came to his side’s rescue with a well-constructed 54 not out that guided West Indies to 232-8 at the close. Crucially, he found an ally in Kemar Roach with whom he has so far added 55 for the ninth wicket. Roach has so far scored an invaluable 25 not out off 63 balls with four boundaries. 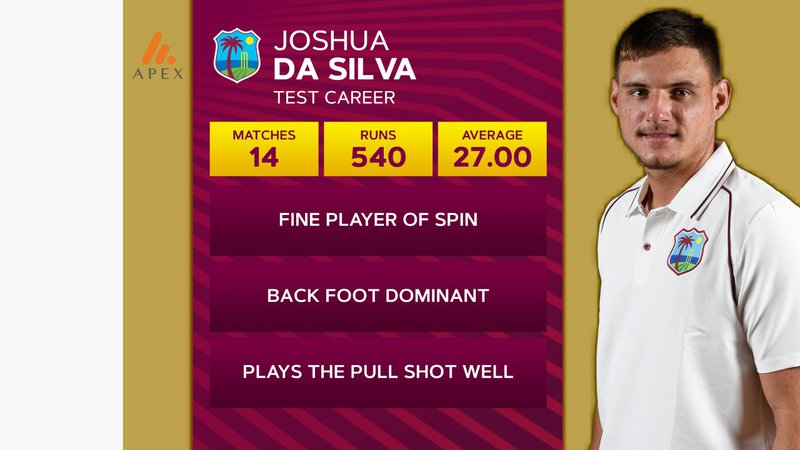 The partnership was one of three anchored by Da Silva, the 23-year-old also putting on 33 for the seventh wicket with Kyle Mayers who made a breezy 28, while adding a further 49 for the eighth wicket with Alzarri Joseph who also struck 28. Da Silva has so far faced 152 balls in just over 3-½ hours at the crease and counted four fours, the last of which – an elegant clip to the ropes at mid-wicket – raised his fourth Test half-century in the fifth over before the close.

“Those partnerships were extremely important. A lot of thanks to Alzarri and Roach – they played pretty well – and Kyle Mayers as well with that 28,” Da Silva said. “All of us played a very big part and Roach and Alzarri even played a bigger part than me. Similar to the England innings, it was very important to get some runs in the [back] end, especially to get a lead – it’s very important to get a lead.We just want to let the tail wag a little bit and see how much more runs we can get as well.” 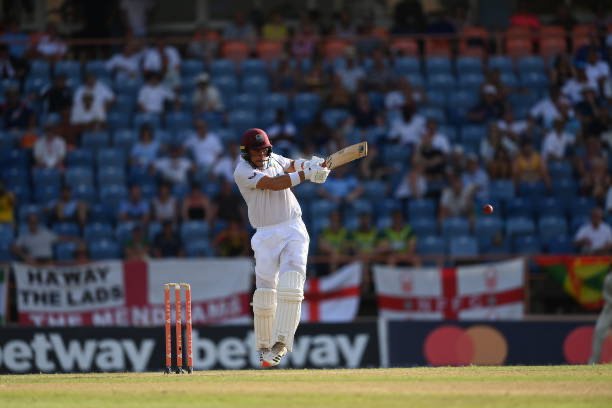 Earlier, eft-handed opener John Campbell struck 35 as he led a 50-run opening stand with captain Kraigg Brathwaite (17), after West Indies launched their first innings at the start of play. The stand kept England without success in the first hour but things quickly fell apart in the second, altering the shape of the contest.

Brathwaite fell in the second over after the first drinks break, playing back to one from medium pacer Ben Stokes (2-40) and he was adjudged leg-before wicket. The left-handed Mayers then hit four fours and a six in a free-scoring 39-ball knock but with tea already beckoning, drove Stokes to mid-on.

Unbeaten on five at tea with Da Silva on six and West Indies on 134-7, Joseph lashed two fours and a six off 59 balls before he fell caught behind off Overton, just before drinks. But any hopes of wrapping up the West Indies innings under 200 were then foiled as Roach dug in for the next 63 balls and 80 minutes, to see the home side to a lead.

Play will resume on Saturday at 10am (9am Jamaica).