Campbelle Hits Career-Best But West Indies Go Down To... CWI Congratulates Players Named IN ICC Teams Of The Year 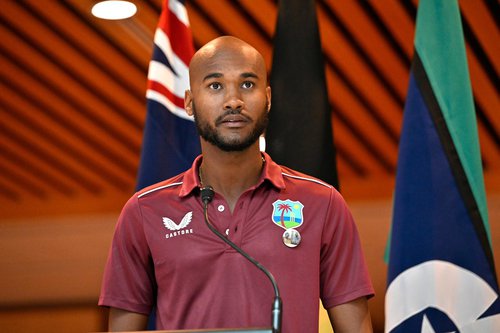 ST JOHN’S, Antigua – Cricket West Indies (CWI) has congratulated the players named in the International Cricket Council’s (ICC) Teams of the Year for 2022. Three West Indies players were announced by the ICC on Tuesday in the annual awards.

Captain Kraigg Brathwaite was picked in the Test Team of the Year, while wicket-keeper/batsman Shai Hope and fast bowler Alzarri Joseph earned spots in the One-Day International (ODI) Team of the Year.

Brathwaite averaged 62 in seven Tests during the last calendar year, scoring two hundreds – a monumental 160 against England at Kensington Oval in March and an outstanding 110 against Australia at the Perth Stadium in December, on the eve of his birthday.

Hope maintained his consistency in the ODIs, averaging 35 with three centuries from 21 ODIs. He was among only seven players to pass 700 runs for the year. The highlight was his knock of 115 in his 100th appearance against India at Queens Park Oval in July.

Joseph was also among the leading wicket-takers in ODIs for the year, with 27 wickets at an average of 25 runs per wicket from 17 matches and featured in all three formats.

“Captain Kraigg Brathwaite continued to lead from the front with a number of world-class batting displays, which characterize his composed and courageous style of play. The major achievement was leading the team to victory over England to capture the Richards Botham trophy which brought glory to West Indies fans. “Shai Hope also demonstrated his immense talent in front the stumps and agility behind the wickets. He too showcased an exceptionally high level of skill, and a great sense of occasion, with a remarkable century to mark his 100th appearance against India in Trinidad.”

Skerritt added: “Alzarri I Joseph emerged as the leader of the bowling attack in ODIs and was consistent and persistent all year in all three formats. He has matured from an exciting young speedster to a truly world-class pace bowler and is reaping the rewards for the hard work he has been putting in off the field. We applaud all three for their outstanding performances in 2022 and also wish them continued success and growth in 2023 and beyond.”