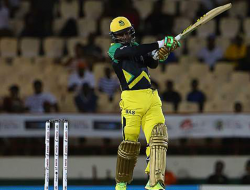 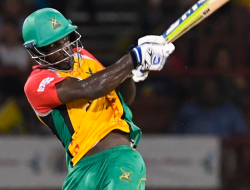 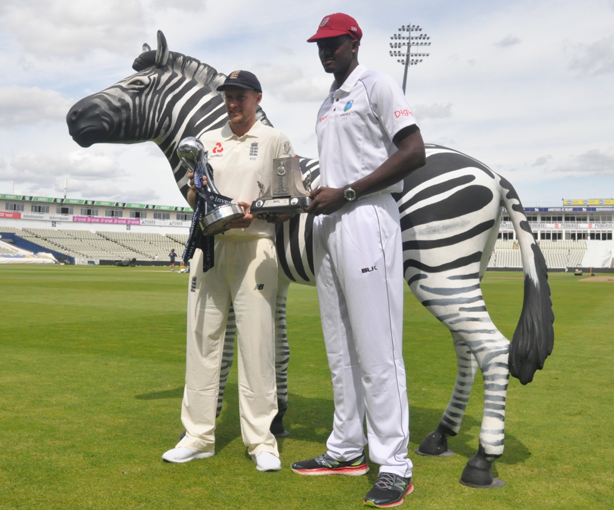 18th August 2017 Comments Off on Cook and Root cast West Indies into the darkness Views: 1487 News

As day turned to night, and while a historic fixture was being graced with a far more impressive sunset that a dank morning in Birmingham had threatened, a familiar figure made light of the creeping darkness to leave England in the pink and Edgbaston’s 21,000 punters in beery good spirits – not that West Indies’ toiling attack had quite so many reasons to be cheerful.

Alastair Cook has been threatening a big score all summer long – his 88 against South Africa at The Oval was arguably the most important innings of England’s season to date – but at the scene of his career-best 294 against India in 2011, he racked up his 31st hundred, and his first since returning to the ranks, to grind England into a position of utter dominance in their maiden pink-ball Test.

He did so, for the most part, in the company of the man to whom he had passed the reins. In the course of a stand that spanned 66.5 overs and the best part of five hours, Cook and Joe Root added 248 for the third wicket to atone for another flimsy display from their top-order rookies and cement England’s status as runaway favourites in this three-Test series.

Root, in keeping with a remarkable run of form that has now carried him to half-centuries in each of his last 11 Tests – a new England record – was, as usual, the principle aggressor. Until he missed a loose drive in the 75th over – beaten by late inswing from Kemar Roach, the most energetic and impressive of an outclassed pace quartet – he had scarcely played a false stroke in racking up 136 from 189 balls, his 13th Test century and second of the summer.

West Indies’ hangdog day in the field was epitomised in bizarre circumstances in the closing half-hour of play. For reasons known only to the captain himself, Jason Holder chose, in the 81st over, to pass over the chance to attack England with the shiny new pink ball and instead brought himself on to bowl three tepid deliveries before limping off the field with cramp.

To compound the sense of a side that had lost their bearings, the spinner Roston Chase was called upon to complete an over in which England brought up their 300th run, and he might have carried on for the 83rd as well had it not been for late change of heart – presumably initiated by the coach Stuart Law on the player’s balcony.

That passage of play was a dereliction of opportunity from West Indies, particularly given how tentatively Dawid Malan had been playing since replacing Root at the crease – he had been dropped on 2 as he cut Kraigg Brathwaite through the hands of slip, before completely losing sight of a Roach bouncer that didn’t get up nearly as dramatically as the jerk of his head had indicated. But Malan endured to the close, on 28 not out, still a long way from convincing as a Test batsman but armed with the sort of reconnaissance that could yet pay dividends when play resumes tomorrow afternoon.

In a parallel universe, West Indies might have been drawn to the lights like a swarm of moths and given England’s middle-order the sort of test that the conditions merited. But they already had the look of a team that had seen enough. Cook, crucially, had not, and though the prospect of an evening new-ball attack from James Anderson and Stuart Broad surely will not be passed over should England be in a position to declare at tea tomorrow, he has a monster in his sights if he can get going again.

Throughout the first two sessions, both of which had been played without the floodlights so much as blinking, only two deliveries had truly troubled any of the batsman – it just so happened that both claimed wickets in England’s wasteful first half-hour, as their unstated ambition of using this series to resolve their top-order issues in good time for the Ashes received an early reality check.

Mark Stoneman, whose impending debut had been confirmed on the eve of the game, duly received his cap from Jonathan Trott in the team huddle before play and emerged from the pavilion shortly before 2pm to become Cook’s 12th opening partner since the retirement of Andrew Strauss in 2012.

And briefly, he looked like one of the more accomplished candidates for the long-term role. After being granted a yawning sighter from Roach – a Harmison-esque wide that stung the fingers of second slip – Stoneman eased himself off the mark with a beautiful cover drive from his second legal delivery, before clipping a second four, off his pads and through square leg, in the same erratic over.

But Roach, it transpired, was merely finding his range, and with the first ball of his second over, he nailed it to deadly effect. Stoneman propped half-forward to a good-length delivery on middle and leg, only to lose the top of his off stump as the ball zipped off the seam and past his outside edge.

Enter Westley, who once again looked settled at the crease in an 18-ball stay, without translating that serenity into a telling performance. He too chipped in with a brace of boundaries – all told England amassed 22 in the morning session alone, more than 80% of their lunchtime total of 102. But, without addition to his 8, Westley was pinned on the front pad by Miguel Cummins’ third delivery and sent on his way via a review.

Cook, as he has become accustomed, watched the events unfold at the other end with a faint air of bemusement, and simply got on with his job. His innings was a classic example of playing each ball on its merits – he got off the mark with a first-ball tap into the covers, and had picked off five fours from his next 13 balls before resorting to another single.

Once Root had joined him, with the score on 39 for 2 in the eight over, he reverted to his familiar holding role – not that either man needed to be especially sluggish against a samey attack who served up too many freebies on both sides of the wicket. With his cut, flick and punch through the covers in full working order, he ground his way towards one of his trademark daddies.

Cook’s 150 arrived via a familiar nudge off the hip for four, as Edgbaston burst into a tuneless chorus of “Ali-Ali-Cook Nah Nah Nah” that must nonetheless have sounded like a celestial hosannah to Edgbaston’s beancounters. By that score, at least, the first day of floodlit Test cricket in England had been a resounding success. The future of the format may, however, rely on stiffer competition in the long run.