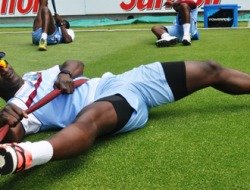 Sammy to play at all cost

The Jamaica Franchise coach Junior Bennett in lamenting his team’s dismal batting performance, declared that his players have to bounce back from their back-to-back defeats in the West Indies Cricket Board (WICB) Four-Day Professional Cricket League.

The Jamaican cricketers returned to the island yesterday after slumping to a disappointing innings and 22-run loss to the Windward Islands Volcanoes inside three days at Arnos Vale in St Vincent.

The Windward Islands Volcanoes encounter was Jamaica’s second loss in six rounds, which saw them slipping to fourth in the standings on 57 points, 35 points behind leaders Guyana Jaguars on 92. After being at 192 for five in last week’s encounter, the Jamaicans made a mockery of themselves and were dismissed for 204 in their first innings and 102 in their second innings.

“We have played some poor cricket in the last game [and] almost all facets of our game went to pieces; personally, I believe that our batting definitely has to step up to the plate. So far we have not posted a good first innings total for the entire season, and once you don’t have a good first innings total we are going to struggle right throughout the entire game and that is exactly what happened in the last game,” Bennett told the Jamaica Observer shortly after the team’s arrival at Norman Manley International Airport yesterday.

The Jamaican’s next assignment will be at Sabina Park over the weekend, against the Trinidad & Tobago Red Force who are also faced with batting woes and are fifth in the standings on 30 points.

“We definitely have to bounce back in that game there; but our batting has to improve. There is absolutely no way we can continue to bat like this and expect to get good results. I don’t think we represented well in our last game, so we just have to pick ourselves up now…we have four rounds of matches left and we just have to go out there and play some good, sensible cricket right throughout,” said Bennett.

With the bowling and general fielding being satisfactory so far this season, the veteran coach stressed that the batting performance has to improve drastically.

“I know the selectors will meet; so after they meet we will see what they have up their sleeves, but this batting is just not getting the job done. We have been bowling fairly well throughout the tournament… if you look at the stats it speaks for itself, our bowlers have done well, but when you look at our batting statistics, its terrible…Nikita Miller averages 44 and no other batsman average over 30,” he explained.

Captain Tamar Lambert also highlighted the lack of quality within the batting unit and urged the batsmen to apply a level of consistency in order to assist the bowlers.

“Once again we didn’t bat properly in both innings and that is our major concern going forward. We can’t really bat two and a half sessions in a first-class game and all out for 204, there and then the bowlers will definitely be under a lot of pressure and they have been under pressure all season and it’s just for us to start putting the runs on the board so that the bowlers can go out there relaxed and do their thing,” he said.

“Our batting has been letting us down from last season and if you really look at the averages, its’ nothing to speak about at the first-class level. If we want to go forward…if they (the batsmen) want to go forward then it’s time for them to produce the goods, if they can’t then they just can’t, but one thing is for sure they have been getting the opportunity, it’s just up to us as batters to go out there and perform.

“So we are trying to rectify that. I don’t know how as yet, but that is our major focus right now, so it is disappointing but at the end of the day we have to move forward in this game against Trinidad & Tobago and we need to get more points than the opposition. We are going to sit down…myself, the coach and selectors and try and come up with the best 13 for this game,” he added.