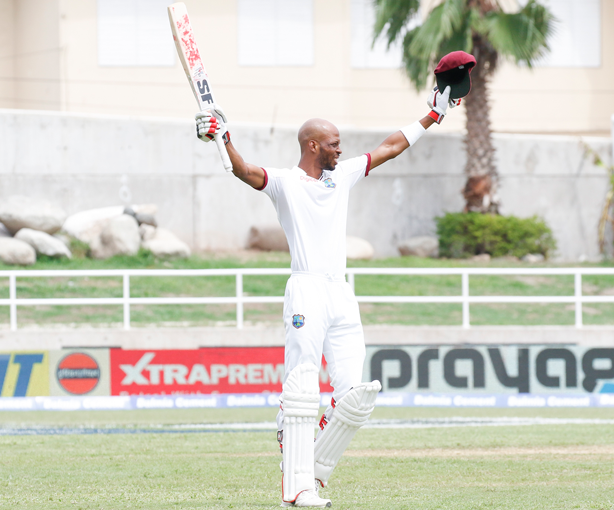 There is a lot to be said of Roston Chase. He’s languid at the crease. He plays late and close to his body. He wasn’t perturbed by a tough situation. And his timing stood out. Two days short of 50 years since it was last done for West Indies and six days after the 80th birthday of the man who did it, Chase achieved the double of a century and a a five-for in the same Test. In the process he helped pull off an improbable draw: batting for survival, West Indies had lost four wickets in 15.5 overs on day four, but on the final day they gave up only two.

Chase looked correct when he defended, graceful when he attacked and bloody determined all through. Sir Garry Sobers would’ve enjoyed a fellow Bajan emulating his feat with an innings like that.

On a wet day four, along with 82.1 overs, it appeared West Indies’ fight had gone missing too. Their openers fell early, and in ungainly fashion. One senior player fell for a duck and another was a sitting duck against a short ball. It had become a walk in the park for India. This morning, however, they were stuck in the mud. The first 25 balls cost 40 runs. The fast bowlers were hit through the line and over the top. The spinners were hit against the turn. Chase had finally made it a contest. At tea, he had the favourites sweating. An hour and a half later, he made Virat Kohli concede and take the draw. The first draw at Sabina Park since 1998.

India tried to bounce Chase, he pulled them away. India used reverse swing, he kept them out shortening his backlift. India tried to spin him out, but his open stance showed him exactly what was coming at him. On 99, he flicked a ball on his pads right through the man at midwicket, completed the single and celebrated his first Test hundred in his second Test match by crossing his hands in the shape of an X over his head. His coach and team-mates were clapping with gusto. Sir Viv Richards was up on his feet screaming “Roston!”

From the other end, Jamaica’s own Jermaine Blackwood smashed 63 off 54 balls and the man who replaced him at the crease, Shane Dowrich, applied himself beautifully. He fell 26 short of what might have been a maiden Test hundred when umpire Ian Gould adjudged him lbw to Amit Mishra not spotting an inside edge.

This was only the third time over the last 12 Tests that a Kingston crowd got to watch cricket on the fifth day. And while their numbers could have been better, their investment in the match couldn’t be faulted too much. One fan implored Dowrich to “come again” – meaning restart – after he turned his nose up at the turn a Mishra legbreak got. The outside edge evaded a diving Ajinkya Rahane at slip. Another boomed “good shot, good shot” when Chase drove R Ashwin down the ground. Among the fans was Sheldon Cottrell, who had completed his CPL stint last week, with a little girl next to him. They were all watching history.

India bowled 88.1 overs. They conceded 340 runs and could get only two wickets. For the first time in nine days, their opposition was willing to give, well, opposition. Kohli began to chirp at Chase to see if he could be unruffled. Mishra fielded a ball that was pushed back at him and flung it back at the batsman in frustration. Things were getting out of hand. More accurately, West Indies were not giving anything away under the the kind of pressure where giving away an inch was as good as a mile. Chase and Dowrich raised the team’s first hundred partnership of the series at the rate of 3.77 runs per over. Chase and Blackwood had added 93 runs at 5.26 an over. This was not backs-to-the-wall batting. This was special.

Those in the know say batsmen need to switch on and switch off. But it was difficult to say if Chase ever switched off. The smallest of smiles broke through when he secured his century; it was only his third in first-class cricket and this was only his 31st first-class match. He was batting like he had a 100 of each.

Chase defied India when they had secured a lead of 304 runs, and then taken four wickets in only 15.5 overs on a rain-hit fourth day. With 98.1 overs on the final day, they were supposed to get back-to-back Test victories in a series away from home. Something that has not happened since 2005, against Zimbabwe. Dilute the equation to the top-eight teams, and you end up at 1986, against England.

The bowlers did try. Mohammed Shami made the old and the new ball swing. Ishant Sharma kept squaring batsmen up. Ashwin couldn’t have one of his days – 30-4-114-1. Umesh Yadav and Mishra were disappointing, a combined 37-8-134-2.

West Indies saw every ball that came down, inspected them carefully and then put them in their place. As good as the strokes themselves was the batsmen’s belief they could measure up.

Blackwood showed it when he lifted Shami over his head for a six. When he leapt back, stood tall and hit Ashwin despite the extra bounce to the cover boundary. He became the first West Indian since Shivnarine Chanderpaul in 2014 to hit two half-centuries in the same match.

Dowrich showed it when he lofted Ashwin over the long-on fence. When he used Umesh Yadav’s reverse swing to his advantage and flicked through midwicket and when he topped that by pulling the next ball to the boundary.

Holder showed it when he blunted a brutal short ball from Shami, dropping his wrists but keeping his eyes on it to make sure he could control where it fell. He got to his fifty with a six against Ashwin.

It was only the first time in West Indies’ history that their Nos 5 through 8 had scored 50 or more in the same innings. That’s so rare it has only happened five times in all of Test history.

The man who inspired it all walked away unbeaten after an entire day’s play.