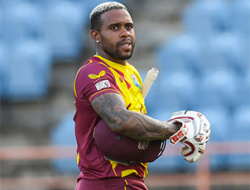 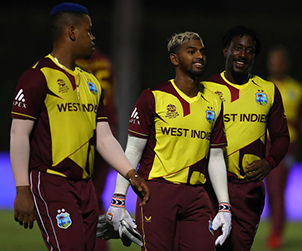 Toss: Afghanistan won the toss and elected to bat

Roston Chase, participating in his maiden global tournament, stood tall with an unbeatable half-century as West Indies completed their two warm-up fixtures ahead of the ICC Men’s T20 World Cup tournament. The tall right-hander made 54 not out off 58 balls with six boundaries and a six as West Indies closed on 133-5 off their 20 overs in reply to Afghanistan’s 189-5.

Chase batted at Number 3 and came to the crease after Lendl Simmons was dismissed in the first over. He shared a 70 run fourth wicket partnership with vice-captain Nicholas Pooran, who scored 35 off 26 balls. The stylish left-hander hit four fours and a six.

Off-spinner Mohammad Nabi registered figures of four overs, two maidens, three wickets for two runs, which played the key role in West Indies slow start in the run chase – as they slipped to 50-3 after ten overs.

Earlier, Afghanistan won the toss and opted to bat as Evin Lewis, Andre Russell and Akeal Hosein got their first taste of action for West Indies after not participating in the first warm-up game against Pakistan on Monday. As openers Hazratullah Zazai (56) and Mohammad Shahzad (54) raced out of the blocks in the first six overs with the score of 62-0, a big score seemed on the cards. However, some solid death overs from left-arm pacer Obed McCoy and seamer Andre Russell, who collectively picked up three wickets, restricted Afghanistan’s anticipated late flourish.

Defending champions West Indies will now focus on their opening match against England on Saturday at the Dubai International Stadium. First ball is 6pm (10am Eastern Caribbean Time/9am Jamaica Time)