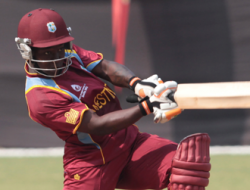 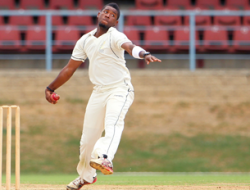 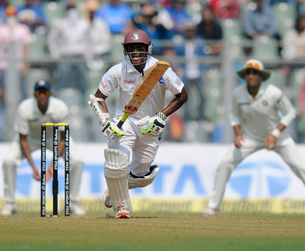 GEORGETOWN—The 42-year-old was unfurled a superb unbeaten 141, an innings which allowed the two-time reigning champions to pile up 357 for six in their first innings and dominate the second day of the Regional Four-Day contest at the National Stadium here.

He received support from captain Leon Johnson who made 69 and Barbadian all-rounder Raymon Reifer who chipped in with 38.

Heading into day three, Jaguars lead by 195 runs, leaving Red Force with a complicated task of salvaging anything positive from the game.

Resuming the day on nine without loss in reply to Red Force’s 162, Jaguars lost both openers cheaply to slip to 45 for two.

Rajendra Chandrika edged the second ball of the morning from pacer Marlon Richards behind to fall for 12 with the score on 13 before Shimron Hetmyer, who stroked five fours and a six in gathering a breezy 31 off 29 balls, pulled off-spinner Jon-Russ Jagessar low to Yannic Cariah at mid-wicket.

Three key partnerships – two involving Chanderpaul – then hauled Jaguars back into the contest.

Johnson first put on 49 for the third wicket with fellow left-hander Vishaul Singh who made 26, before combining with Chanderpaul to add a further 141 for the fourth.

The knock was Johnson’s second half-century of the season and it came from 190 balls and included eight fours and two sixes while Chanderpaul passed three figures for the second straight game.

All told, Chanderpaul has faced 220 deliveries and counted 14 fours and a six.

He was unbeaten on 29 at lunch with Jaguars on 136 for three and had worked his way to 83 not out at the second interval with the hosts on 243 for five.

Chanderpaul reached his landmark about 45 minutes after the resumption with a couple to backward square off left-arm spinner Khary Pierre.

Red Force’s best period came shortly before tea when they removed Johnson and Chris Barnwell (3) in the space of 22 balls.

But Chanderpaul dashed any hopes of major further success by anchoring an 89-run, sixth wicket partnership with Reifer, to add to Red Force’s deepening woes.