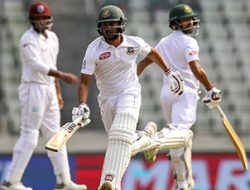 Windies Bowlers Control Bangladesh On Day One Of Second...

The 21-year-old Carty defied a blow to the helmet and a destructive spell from leg-spinner Hayden Walsh, Jr with a resolute 114 that revived the Hurricanes after they slumped to 65 for four, after they chose to bat on the opening day of their day/night, first-round match at the Three Ws Oval.

At the same time, four-time defending champions Guyana Jaguars grabbed two early Windward Islands Volcanoes wickets, after veteran off-spinner Shane Shillingford triggered a batting collapse and they were bowled out in the first hour after tea in another day/night contest at the Daren Sammy Cricket Ground.

Carty was struck on the helmet by fellow, former WINDIES Under-19 teammate Chemar Holder with a bouncer approaching his milestone, but he drove fast-medium bowler Justin Greaves through cover for his seventh boundary to reach the landmark.

The St. Maarten-born, opening the batting, collected 10 fours and one six from 198 balls in a shade under 5 ½ hours and shared a cluster of useful stands down the order to give the Hurricanes a boost, after Walsh, a former Hurricanes leg-spinner, tried to derail them with 5-75 from 16.2 overs.

Carty was the only Hurricanes batsman that passed 20, but stands of 41 for the fifth wicket with Terance Warde, 48 for the seventh wicket with fellow St. Maartener Daniel Doram, the former Netherlands left-arm spinner, and 40 for the eighth wicket with Jeremiah Louis carried the visitors to a respectable total.

Pride left-handed opening pair of Anthony Alleyne, not out on two, and Shayne Moseley, not out on eight, batted through 40 minutes under the lights to ensure the hosts did not lose a wicket before stumps were drawn.

Earlier, Vishaul Singh propped up the Jags batting with a resolute 75 that included six fours from 157 balls in close to 3 ½ hours, after the visitors were sent in to bat.

He shared a valuable 96 for the eighth wicket with Romario Shepherd to revive the reigning champions from a precarious 101 for six before he fell to Shillingford.

Shepherd made 44, but Shillingford ended with 4-59 from 24.1 overs to undermine the rest of the batting.