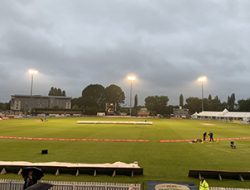 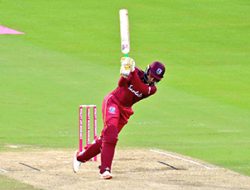 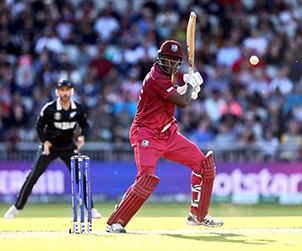 MANCHESTER, England – Carlos Brathwaite spoke to members of the media after the West Indies sixth match of the ICC Cricket World Cup against New Zealand at Old Trafford. The powerful allrounder scored an amazing maiden ODI century which pulled West Indies around from the brink as they came close to a sensational victory. He made 101 off 82 balls with nine fours and five sixes – three of which came in the 48th over off pacer Matt Henry which went for 25 runs. Brathwaite was last man out as West Indies made 286 off 49 overs in reply to 291-8 to fall agonisingly short by just five runs in an epic encounter witnessed by a capacity crowd.

West Indies were well poised at 130-2 after 20 overs thanks a 122-run partnership between Shimron Hetmyer (54) and Chris Gayle, who made 87 with six sixes. They slipped to 164-7 until Brathwaite led a superb counter-attack with the tailenders. He shared a last-wicket stand of 41 off 24 balls with Oshane Thomas and also added 47 with Kemar Roach (14) and 34 with Sheldon Cottrell (15).

Earlier in the match Cottrell continued his excel as he had a hand in seven of the eight New Zealand wickets to fall. The left-arm seamer returned figures of 4-56 – which included the wickets of openers Martin Guptil and Colin Munro leg-before-wicket and cleaned bowled in the first over. He also held two catches off Brathwaite’s bowling in the final over and effected the run out of Colin deGrandhomme with  a superb one-handed pick-up and direct hit. The Man of the Matchaward went to New Zealand skipper Kane Williamson who hit 148, his second century of the tournament. Ross Taylor supported with 69 in a third-wicket stand of 160 that was the rock upon which the Black Caps built their total.

“It was bittersweet. For me personally, for my confidence, as a result of all the hard work I’ve been putting in, it’s finally good that it comes to fruition… I’m giving thanks for the performance, even getting the team into the position we got into before I got out. I thought it had enough bat on the final shot. I was willing it to go up and up and up.”

Brathwaite added: “I just knew how much everyone in the dressing room wanted it. We always talk about belief. For me to be the person out there to try to bring it home, that was the only thing on my mind, finding a way to get it done.