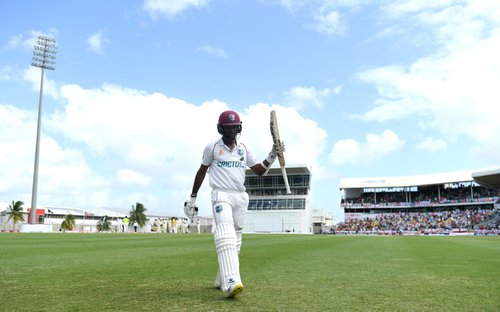 Captain Kraigg Brathwaite played the third longest innings in West Indies Test history, as the home side fought hard with the bat on the penultimate day. Resuming on Saturday at 288-4, West Indies were eventually dismissed an hour before the rescheduled close for 411, with Brathwaite scoring 160 – his 10th Test century and first on home soil.

This gave England a lead of 96 runs, and they closed the day on 40 without loss, ahead by 136 runs overall which has left the match intriguing poised heading into the final day on Sunday.

Brathwaite showed tremendous powers of concentration and faced 489 balls and struck 17 fours before he fell 40 minutes before tea when left-arm spinner Jack Leach (3-118) got one to rip past a defensive prod and hit off-stump. Brathwaite took the spotlight for the second day running, stretching his innings into a marathon 710 minutes – the third longest Test innings by a West Indies batsman. Only Brian Lara has batted longer for the West Indies when he made his world-record 375 in 766 minutes and when he reclaimed the record with his memorable 400 not out 778 minutes.

“Tomorrow is another big day for us. We have to work extremely hard,” said Brathwaite. “We’ll just play it and see what happens. We have to start back tight as a bowling unit and obviously make it hard for England’s batters to score.”

Brathwaite’s tenacity ensured West Indies stayed in the game as he extended his fifth wicket stand with night watchman Alzarri Joseph (19) to 52, following a delayed start to the day due to rain. He flicked the first delivery of the day from seamer Matt Fisher to the fine leg boundary and remained positive with slap square of the wicket for another four off the same bowler a few overs later and another boundary to third man off pacer Saqib Mahmood (2-58).

Joseph, on four at the start, got in on the act when he smashed part-time off-spinner Dan Lawrence over deep square for six but fell when he cracked Ben Stokes (2-65) to point where Dan Lawrence held a sharp chance.

Wicketkeeper Joshua Da Silva, given out lbw on three but reprieved by DRS, then put his head down in a determined 33 that lasted 112 balls and 2-¾ hours, combining with Brathwaite in a 34-run seventh wicket stand. Brathwaite brought up his 150 in the sixth over after the interval with a single to mid-on off Leach before finally being undone.

Da Silva shepherded the tail while taking more time out of the game before Kemar Roach (1) and Veerasammy Permaul (5) eventually fell to leg-before decisions to Woakes and Saqib, 41 balls apart, to leave West Indies on 403-9 Da Silva was last out, hit in front by Leach.