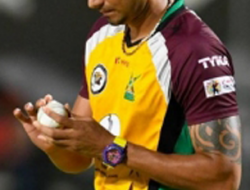 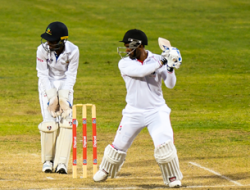 Campbell, Green combine to bowl out Red Force for 243 on Day One

Campbell grabbed 4-40 from 17.5 overs with his flighty, part-time off-spin and fast-medium bowler Green snared 4-45 from 19 overs, as the Red Force were bowled out for 243 in their first innings, about half-hour prior to the close on the opening day of their sixth-round match at Sabina Park.

The Scorpions entered the match concerned about losing Miller, whose 23 wickets and stubborn lower-order batting in the last two matches had sparked their revival.
He flies out of the Caribbean this week destined for New Zealand, where he will be a part of the West Indies One-day International squad for a three-match series against the hosts.
But Campbell and Green eased worries about the bowling, as Jeremy Solozano hit the top score of 62 for the Red Force, Ewart Nicholson supported with 50, Amir Jangoo made 39 and Tion Webser added 29 before they folded.

Campbell returned to finish not out on 14 and fellow left-handed opener Trevon Griffith was not out on two, as the Scorpions reached 16 without loss when stumps were drawn in fading light.
Red Force started solidly with Jangoo and Solozano sharing 71 for the first wicket, but the visitors stumbled to 110 for two at lunch.

Jangoo was lbw to leg-spinner Damion Jacobs and fellow left-hander Yannic Cariah was caught close to the wicket off Campbell for 14 in the final half-hour before lunch.
After the interval, the Scorpions bowlers made scoring a little more difficult and the resulting pressure saw the Red Force reach 188 for five at tea.
Ewart Nicholson came to the crease and roughed up the Scorpions’ bowling in-between periods of circumspect batting, ushering Solozano to his 50 from 103 balls before he brought up his own landmark from just 64 balls.

He added 73 for the third wicket with Solozano before he was caught behind off Green from the next delivery he faced, triggering a mini-collapse that saw Red Force captain Denesh Ramdin caught behind four overs later, off the same bowler, who also had Solozano caught in the slips three overs later.
Nicholson struck four fours and two sixes from 65 balls and Solozano cracked seven fours from 148 balls.

After tea, there was token resistance from the rest of the Red Force batting, as Green and Campbell worked their way through the tail and tightened the Scorpions’ grip.
Red Force made two changes, bringing Solozano and Nicholson in to replace departing West Indies One-day pair of Kyle Hope and Jason Mohammed.