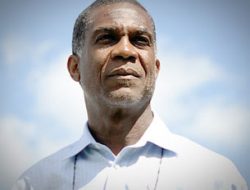 Dave Cameron has been re-elected for a third consecutive two-year term as WICB president. Cameron was the lone nominee for the position, and received 12 votes at the WICB Annual General Meeting on March 26 in Barbados. Emmanuel Nanthan, WICB’s vice-president for the last four years, was also set to be re-elected for a third consecutive stint in the position.

Despite being an imposing figure within the WICB, Cameron has not been a popular administrator in the West Indies. Throughout his tenure, Cameron’s policies and decisions have been criticised by many former cricketers as well as by fans. The absence of any opposition on the WICB board has been the main reason Cameron has managed to continue as the head of the WICB.

Nonetheless some on the WICB board remain sceptical of Cameron. One director, who has been part of the WICB board and observed Cameron closely, felt the Jamaican takes things “personally”, which does allow for constructive discussion.

According to this director Cameron needs to focus on improving his relations with WICB board going forward. “He needs to temper himself. It seems to me he still does not have confidence in some directors. The trust is not there. It is also because if some people speak out at meetings, he will feel that those people are against him. But all those people want is the best of West Indies cricket. He takes everything personal, as if they are attacking him.”

The director, who wished to remain anonymous, also felt that Cameron “favours” some territorial boards more than others. Asked why the board would elect him for a third successive term, the director said that those who oppose him “prefer to remain silent and go with the status quo”.

With West Indies having already missed out on the 2017 Champions Trophy in England, the priority now is to make sure they receive direct entry for the 2019 ODI World Cup, instead of having to go through the qualifier. To achieve that goal, the WICB recently made fresh appointments, hiring former West Indies captain Jimmy Adams and former Australia batsman Stuart Law in important roles. Adams took over as director of cricket from Richard Pybus, while Law was named as West Indies’ coach after the sacking of Phil Simmons last September.

It is also understood that Cameron, along with new WICB chief executive officer Johnny Grave, will travel to India to finalise the schedule for the limited-overs series scheduled in July.