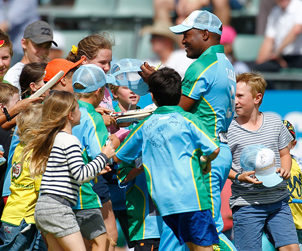 LONDON – Former batting star Brian Lara managed just 16 but the Rest of the World XI went down to Help for Heroes XI by four wickets in the Cricket for Heroes Twenty20 charity match at the Oval, Thursday.

Set 158 for victory, Help for Heroes chased down their target with three balls remaining, with former India captain Mahendra Singh Dhoni top-scoring with an unbeaten 38 and striking the winning runs.

Former England captain Andrew Strauss, now the Director of Cricket, stroked 26 off 17 balls – an innings that gathered 4 000 pounds sterling after a supporter donated 1 000 pounds for every boundary the left-hander hit.

Strauss also produced a stroke of brilliance when he pulled off an excellent catch to dismiss the 46-year-old Lara who had looked set for a big score.

However, it was former Sri Lanka stroke-maker Mahela Jayawardene who staged the fireworks for Rest of the World, top-scoring with a typically elegant 48.

The game raised 300 000 pounds sterling for the Help for Heroes charity, which gives support to military personnel injured in the line of duty.