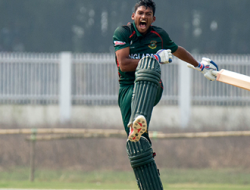 Small cameo for Bravo but Qalanders lose to Russell’s...

The day before the two sides first met this year, a member of Bangladesh’s coaching staff was looking at the West Indies pace bowlers quite intently during practice at the National Cricket Academy ground. Exactly a month later, on the eve of the Under-19 World Cup semi-final between the two teams, the focus still remains on pace bowling.

West Indies’ new-ball attack has been one of the highlights of this tournament, particularly the sight of the beanpole Alzarri Joseph steaming in and consistently hitting high speeds. He has also generated movement to trouble the opposition. Joseph and Chemar Holder, the injured Obed McCoy’s replacement, put Pakistan under early pressure in the quarter-final, which West Indies won by five wickets.

Bangladesh crushed West Indies 3-0 last month, but they need to have a second look at their bowling attack and sharpen up during training sessions. Much of it has revolved around tackling the short balls, which have been regularly directed at the throat by the net bowlers.

Bangladesh coach Mizanur Rahman was wary of the threat posed by Joseph, but believed that a solid top-order platform could help his side post a good total.

“[Alzarri] Joseph is one of the best bowlers of this tournament,” Mizanur said. “But we have plan against all their bowlers. We hope the video session we had will work in our favour. We know him [Joseph] quite well having played against them in three matches before the U-19 World Cup. We are prepared to face him.”

“Their strength is the pace attack so if our top order does their job, it becomes easier for the middle and lower-order batsmen. If we can make around 230 to 250 or even more, it will be defendable.”

West Indies captain Shimron Hetmyer, meanwhile, has drawn confidence from having the fastest bowler in the tournament, especially in conditions that offer little help to the quicks.

“It is a good feeling to be in a team with express pacers in the last two years,” Hetmyer said. “I think we had one pacer in the last World Cup that really went all the way through the tournament, and there was [Kagiso] Rabada from South Africa who was the fastest bowler in the tournament.

“This year being in the team with the fastest bowler is a big boost for us. Playing in the sub-continent, which people don’t really with pace pitches and so far the pacers have done well for us.”

Joseph has turned heads back home, in the Caribbean, as well with veteran commentator and writer Tony Cozier earmarking him a special talent. Joseph hails from the All Saints Village in Antigua, and has been trained by former West Indies pacer Winston Benjamin in addition to taking tips from the legendary Andy Roberts.

Bangladesh captain Mehedi Hasan Miraz, however, has played down the pace threat, saying the hosts were more comfortable against pace, something that they thrived on while playing in South Africa last year.

“We like playing fast bowlers,” Miraz said. “Playing against less pace, there’s a chance of mistiming the ball. We are always confident facing pace. We have done well in South Africa, and also against West Indies. We haven’t faced a really pacy bowling attack yet in this tournament, which has caused problems for our openers.”

The second semi-final will also be Bangladesh’s first match against a Full Member since the tournament opener against South Africa on January 27. Miraz took confidence from Bangladesh’s hard-fought win against Nepal, and the manner in which his team bounced back against Sri Lanka in the Youth ODI series last year. Bangladesh rebounded from 2-0 down to seal that series 3-2.

“We have the belief to turn around from any situation,” Miraz said.” We don’t think negatively. I enjoy playing in the situation that we faced in the last game [against Nepal]. We won three games on the bounce after losing the first two in Sri Lanka last year. Having taken that much pressure in those conditions, has only done good for our confidence.”

West Indies coach Graeme West, too, was not short of confidence ahead of the big game. He has said that West Indies were encouraged by how the Sri Lankan seamers zipped the ball around to test India’s top order in the first semi-final on Tuesday.

“We watched the game yesterday and we’re encouraged to see the ball get through,” West said. “The seamers both sides were effective in the first 10 overs. Anyone that would have watched the Pakistan game, will see where one of our strengths lies with the new ball attack. And we got to look to that to really make early inroads into the Bangladesh batting.”

West also said that the next challenge for Joseph would be to continue bowling with control, instead of focusing too much on pace.

“He’s been very successful and he’s bowled really well,” West said. “We need to make sure that he continues to perform at that level, not to get too carried away. If he starts looking at how fast he’s bowling as opposed to where he’s looking to land the ball, then he might lose some of his potential.”