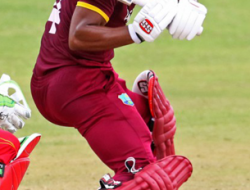 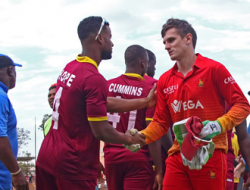 Three wickets and a tie: how the last over... 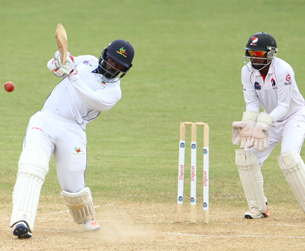 The 23-year-old left-handed carved out a brilliant 186 to fall just short of a double- hundred as the visitors dominated the third day of the game at Queen’s Park Oval, piling up 317 for two declared in their second innings.

Shamarh Brooks chipped in with an unbeaten 76 while opener Omar Phillips got 40.

Set an improbable target of 392 for victory, Red Force stumbled to the close on 57 for three — still 335 runs adrift.

Barbadian opener Kyle Hope made 26, while Yannic Cariah got 25.

Resuming the day on 20 without loss, Pride once again bossed proceedings courtesy of Alleyne, who extended his rich vein of form while anchoring two century partnerships.

In only his 11th first class outing, he put on 101 for the first wicket with Phillips and then took the game away from Red Force by spearheading a 216-run, second-wicket stand with Brooks.

All told, Alleyne faced 215 deliveries in just over 4-1/2 hours at the crease, and struck 24 fours and two fours.

Unbeaten on 10 at the start of the day, Alleyne did the bulk of the scoring in the morning session to raise his third half-century in as many innings off 70 deliveries with ten fours, half-hour before lunch.

Phillips fell, six overs before the interval, lbw to leg-spinner Imran Khan, but Alleyne pushed on to be 67 not out at the break, with Pride on 136 for one.

Alleyne, who top-scored with 88 in the first innings, then completed a deserving century about 50 minutes following the resumption, off 140 balls with 16 fours.

At the interval, Pride were cruising on 279 for one, with Alleyne on 163 and Brooks on 64, and the pair gathered another 38 runs off 40 balls afterwards before the declaration came when Alleyne was finally out.

The right-handed Brooks hit seven fours off 136 balls in 170 minutes.

Test seamer Kemar Roach immediately put the Red Force innings in strife when he removed Imran Khan for a first-ball ‘duck’ off the second ball of the innings, caught at the wicket with the score on two.

Hope and Cariah then resisted in a 48-run, second- wicket stand that seemed to be taking Red Force safely to the close.

However, Hope was bowled by captain and medium pacer Kevin Stoute on 50 for two and with six runs added, off-spinner Kenroy Williams also breached Cariah’s defence in the fourth over before the close, leaving Red Force with a mountain top climb on today’s final day.

At Warner Park, Leeward Islands Hurricanes require another 325 for victory against Guyana Jaguars, with all 10 wickets intact.

A Alleyne c Hope b Richards

M Richards not out 2

a further 335 runs for victory