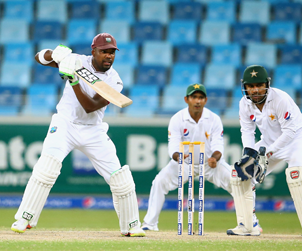 15th December 2016 Comments Off on Bravo invited to meeting with WICB Views: 1428 News

EMBATTLED West Indies batsman Darren Bravo has been invited by the WICB (WI Cricket Board) for a meeting, in light of his recent falling-out with the president of the regional governing body for cricket. However, the date and venue for the meeting has not been announced.

Last month, the WICB cancelled the 27-year-old’s match contract following remarks he made on Twitter about the Board’s president Whycliffe “Dave” Cameron. Bravo called Cameron a “big idiot” after he stated on Sportsmax that Bravo was not offered an ‘A’ contract by the WICB because he was on one previously and failed to live up to that standard.

Bravo subsequently revealed he was never on an ‘A’ contract despite being the only current West Indies batsman averaging over 40 in Test cricket.

Bravo was sent home by the WICB days before the Tri-Nation series in Zimbabwe (which also involved eventual winners Sri Lanka) for “inappropriate and unacceptable behaviour”, which breached contractual obligations.

And he is currently without a retainer after he blanked a central contract offered by the WICB for the 2016-2017 period.

“Until the matter has been resolved and the parties have agreed on a position, Bravo would not be allowed to participate in the current Regional Digicel 4-Day, nor would he be eligible for selection for the West Indies,” the media release continued. “The WICB awaits a response from Bravo regarding the meeting invitation.” The media release ended, “the TT CB is hoping for a quick resolution to this matter.”