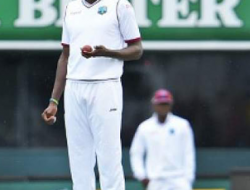 26th December 2015 Comments Off on Brathwaite steels himself for long shift Views: 1294 News

Kraigg Brathwaite is fighting to change his captain’s opinion of his bowling, but knows he will have a long shift ahead with the bat if West Indies are going to make a contest of the Boxing Day Test.

The wicket of Joe Burns amid a tidy spell was just reward for Brathwaite’s canny off spin, which is sparingly used by Jason Holder though it is obvious that the opener takes considerable pride in his second string.

A six-wicket haul in the recent series in Sri Lanka – something Brathwaite was eager to point out – indicated how his bowling is developing, though he doubted Holder’s views on the subject had changed. Two factors, a poor over rate that has left Holder at risk of suspension, and also the banning of Marlon Samuels from bowling, have allowed Brathwaite to contribute more fully.

“I back myself to get wickets whenever I come on, I don’t necessarily bowl a lot, so I just want to keep working at it and keep improving as a bowler,” Brathwaite said. “I cherish my bowling, I don’t really bowl a lot, so when I get a wicket I’m really happy. I don’t think it [Holder’s opinion] has changed a lot, so I will try my best to continue to prove him wrong and get wickets.”

Brathwaite has been the epitome of crease occupation for much of his Test career so far, and has occasionally looked out of his depth against Australia, particularly when Mitchell Starc was swinging the ball earlier this year in the Caribbean. However he showed evidence in the second innings of the Hobart Test that he has found a better balance between attack and defence, putting pressure on the bowlers while stroking his way to a second-innings 94.

“I got a lot of confidence from that innings. For me moving forward and believing in myself, I know it’s not going to be easy but I need to go out there, believe in myself and help the team,” he said. “For me as an opener I want to build a foundation for the team, make it easier for the guys to come.

“So once we rally support with big partnerships we’ll do better as a batting team. My game is around concentrating for long periods and I will continue, if I see bad balls I’ll put them away. I have plans to be positive in my mind and make sure I put away all the bad balls, but [I’m] looking to spend as much time as possible in the middle.”

Brathwaite had little to say about Holder’s decision to send Australia in to bat, nor was he aware of any injury to Kemar Roach despite the fast bowler’s relative lack of bowling in the latter part of the day. However, he agreed that West Indies had to improve their tardy over rate on day two.

“It is a concern,” he said. “I think we need to come out and try to get through the overs as quick as possible tomorrow. That’s a key thing because we don’t want to be behind. A lot of boundary balls, so that could count for some amount of time.”