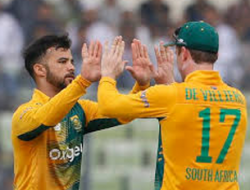 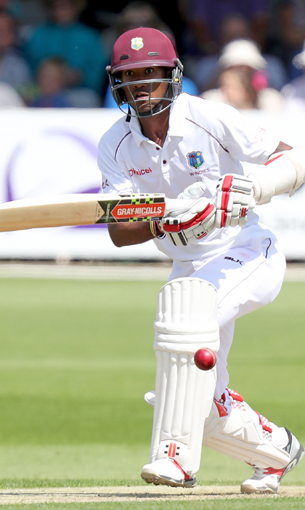 Print
Kraigg Brathwaite’s 14th Test half-century on a testing Day 3 wicket helped Windies stretch their lead against the hosts Zimbabwe to 215, at Lunch at the Queens Sports Club in Bulawayo on Monday (October 23).
With the ball playing all sorts of tricks, Zimbabwean bowlers – notably Kyle Jarvis and Sean Williams – did make life difficult for the Windies batsmen even though they did not have a lot of wickets to show for it. Jarvis extracted reverse swing and the spinners got noticeable turn to keep the batsmen on their toes throughout. The visitors added only 26 runs in the morning hour and 67 overall in the session, for the loss of only one wicket, but didn’t seem to be dominating the ball the way they would have hoped.
Kyle Hope was the only batsman to fall in the session, after a career-best knock of 43. Jarvis got the ball to reverse swing and pinged the batsman on the back pad, bang in front of the leg-stump and the umpire took less than a fraction of a second to raise the dreaded finger. Soon after, Brathwaite flicked to deep midwicket for a couple to bring up his half-century off Williams, in the over before drinks.
Graeme Cremer had to endure disappointment after seeing Brathwaite being dropped twice off his bowling in quick succession just before Lunch. Batting on 60, Brathwaite got a life as Hamilton Masakadza couldn’t hold on to a low chance, while it was the keeper who fluffed a regulation catch in the following over when the opener was on 66.
Shai Hope showed a glimpse of his class and used his feet well to pick up three boundaries every time the bowler banged it short. He went into lunch on 24 not out off 54 deliveries.
Brief scores: Windies 219 and 155/2 (Kraigg Brathwaite 70*, Kyle Hope 43; Kyle Jarvis 1-18) lead Zimbabwe 159, by 215 runs.