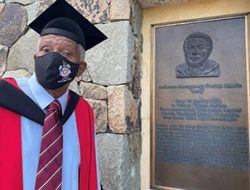 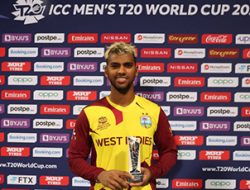 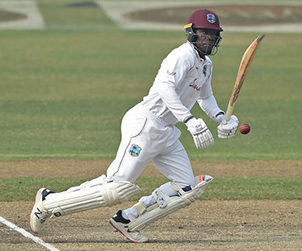 Nkrumah Bonner continued on Thursday, where he left off on Wednesday, scoring a magnificent unbeaten century which was the highlight of the second day of the ongoing three-day contest. Starting the day 90 not out , Bonner blossomed to end on 166 not out – as his team dominated on another placid batting surface. The volume of runs, which came off 366 balls and included 17 fours and two sixes was matched by his ability to concentrate for 8 ½ hours and guide the innings.

Left-hander Raymon Reifer also made the most of his opportunity, with a polished 72 off 155 balls – which included two brilliant sixes – the first a full-blooded pull over square leg and the second a fiercely-struck straight hit that sailed out of the ground. Reifer started the day on two and helped Bonner add 134 for the fifth wicket in 2 ¾ hours, but fell by the run out route after playing a number of audacious strokes on both sides of the wicket.

Bonner said he was happy with his score but even more delighted with the fact that he managed to spend a long time at the crease and get his mind and body re-acclimatized to demands of the red-ball format.

. “It was difficult at the start yesterday, but as I batted longer it got easier and I was happy with the way I fought and how I came through. What was also pleasing was that I played well in similar conditions to what we expect to encounter in Sri Lanka when we tour next month,” he told CWI Media.

In the final session captain Kraigg Brathwaite dropped anchor and has so far reached 34 not out off 122 balls. He shared a second-wicket stand of 69 with Shamarh Brooks, who made 34, but fell to a catch close to the wicket just before the close.

The match continues on Friday at the same venue at 9:30am (8:30am Jamaica Time). West Indies players are using the match as part of their preparation for a two-match Test series in Sri Lanka next month. The series is the second of six series – three at home and three away – that West Indies will play in the 2021-2023 ICC World Test Championship. Please see ICC World Test Championship table here: https://bit.ly/3EcJXpV