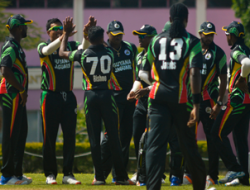 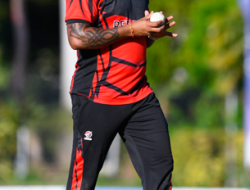 bmobile Endorsee West Indies all-rounder, Dwayne Bravo, has a message to deliver; it’s that we should not be blind to the challenges faced by those members of society who may be differently abled.

In partnership with bmobile, Bravo donated part proceeds from his annual birthday party -’47’-to the National Blind Cricket Team, which is the current Regional T20 and 40-over champions.

No stranger to philanthropy, Bravo also earlier contributed towards the bmobile Foundation’s Book Buddies initiative which sees employees from the company fulfilling the booklists of hundreds of underprivileged students in T&T.

The Red Steel skipper decided to go one step further though.

To show that he genuinely supported their cause, Bravo visited the team during one of their practice sessions at the Edinburgh Ground in Chaguanas, where he got to experience what it was like to play cricket without the ability of sight.

It’s no simple task as he discovered, but the visit was a fulfilling one, that brought greater appreciation for the team.

“First of all, it’s great for me to be here along with my partner bmobile to do something special for the team,” said Bravo.

“For me, putting on the black out glasses which blocks your vision, took a while for me to adjust, I faced about 14 deliveries and was only able to hit about 3 or 4, so it’s very challenging,” he said on the experience of batting blind.

“I have read about them (the team) and seen some clippings in the newspaper or on TV but I have never really experienced them play first hand like I did this morning, so hats off to them and the coaching staff, the people who sacrifice their time and talent to be with them.”

The bmobile Foundation has also supported the team for over five years by assisting them with their annual training requirements.

“Dwayne has always shown a keen and genuine interest in giving back to those less privileged in our society and we are here to support him on that fully,” said Campbell.

“The goal of the bmobile Foundation is to help empower the citizens of T&T through youth, sport, education and health and we see such partnerships and initiatives as key to achieving that goal.

“We sincerely appreciate his desire to give back and willingness to partner with us as we also work towards achieving the Foundation’s goals.”

The players clearly enjoyed the visit, sizing Bravo up, giving him a few ‘talks’, making requests for other players and of course, finishing up the encounter by singing Bravo’s famous hit song, ‘Champion’, even showing off their dance moves.

Bravo assured the team that he would be back with a few more friends, having thoroughly enjoyed the experience, and encouraged the players to support each other.

“I assure you I will come some other time, just to play and just to have fun. I enjoyed it. It was very challenging and sometimes people take certain things for granted.

“But it’s the simple things in life that matter the most. So I just want to encourage you to keep supporting each other as a unit. Unity is key,” said Bravo. Also appreciative of Bravo’s presence was team coach, Harilal Kissoon.

Kissoon thanked Bravo and bmobile for their presence. He also noted that it has been bmobile’s support, which has been forthcoming for over five years now, that has ensured the team’s dominance at the regional level.

“The assistance we receive is very inspiring. We appreciate when companies like bmobile and persons such as Bravo recognise the hard work we are doing, and their contribution and visits provide us with much needed moral support, it’s a great initiative,” said Kissoon.

“Bmobile has been supporting us for quite a few years.

“It has impacted us positively because right now we are the T20 and 40 over champions in the Caribbean and we have been defending that since 2013.”