26th May 2022 Comments Off on Blackwood And Archibald Star For Jamaica And Leeward’s With Top Quality Hundreds Views: 368 News 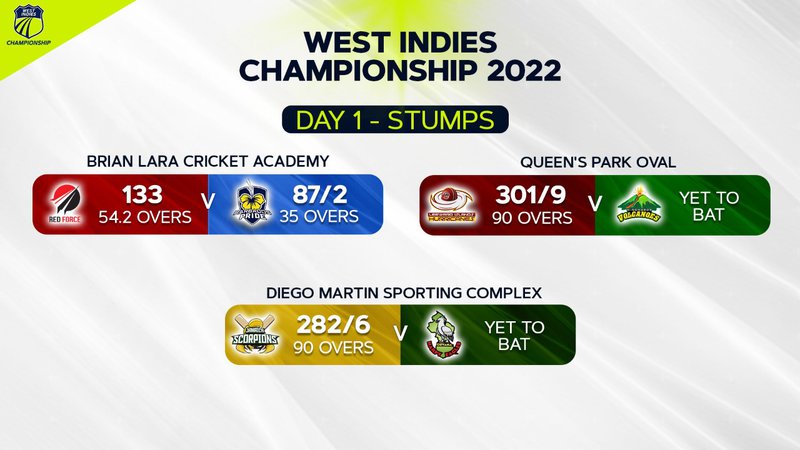 West Indies test vice captain Jermaine Blackwood and Colin Archibald hit centuries of contrasting qualities to shine on the opening day as the West Indies Championship continued with the first day of the fourth round of matches on Wednesday.

The right-handed Blackwood 110 not out (251 balls, 14×4, 1×6) made his eighth first class hundred as the fifth placed Jamaica Scorpions batted around their experienced test player on the way to posting 282-6 against the Guyana Harpy Eagles at the Diego Martin Sporting Complex. Blackwood played with great assurance against the Guyanese attack which included internationally experienced quarter of Kemo Paul, Veerasammy Permaul, Kevin Sinclair and Gudakesh Motie-Kanhai, the latter of whom finished the Harpy Eagles best figures on the day with 2-39 from a economical 21 over spell.

Blackwood was well supported by Alwyn Thomas 51 (118 balls, 8×4) who registered his maiden first-class century for the Scorpions and Alaine Thomas 35 (40 balls, 8×4), in an unbeaten 46-run 8th wicket stand.

The first two sessions of the day saw the Hurricanes precariously placed on 158/7 with left-arm medium pacer Preston McSwean being the Windwards chest wicket taker with four wickets. However, when the Leewards slipped to 179/9, the Windwards seemed set to route the Leewards for under 200 – but when  Archibald joined forces with number 11 Daniel Doram (17) in a unbeaten 122-run 10th wicket alliance, as the Hurricanes ended the day’s proceedings in a solid position.