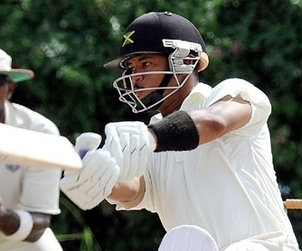 Representing Tamar Lambert XI, Baugh Jr hit 112 and Bernard Jr 105 to lead their team to 381 for eight against Paul Palmer Jr XI, when stumps were drawn on the first day.

The duo, who were having their best outing since the trial series started under a month ago, were supported by former national youth batsman Cassius Burton, another West Indies discard Danza Hyatt and all-rounder Derval Green.

Burton contributed an even 50, Hyatt 38, while Green, a former national Under-19 captain, finished unbeaten on 30.

Recent West Indies Under-19 fast bowler Markino Mindley emerged as the pick of Palmer Jr XI’s bowlers with three for 48.

Another former national youth player, left-arm wrist spinner Dennis Bulli with two for 55 was next best, while part-time off-spinner, John Campbell ended with two for 30.

Jamaica are slated to host the Darren Sammy-led Windward Island Volcanoes, also at Sabina Park, in the opening round of the tournament, which is set to start on November 14.

Taken from The Jamaica Star