25th August 2022 Comments Off on Barbados To Face Leewards In Final After Rain-Hit Final Round Views: 314 News

Barbados To Face Leewards In Final After Rain-Hit Final Round

Barbados to face Leewards in Final after rain-hit final round

The third and final day of the third round of matches in the West Indies Rising Stars U19 Championship presented by WINLOTT Inc., was abandoned due to heavy rain on Monday. This, after there was limited play on the second day on Sunday.

With the results Barbados topped the preliminary rounds with 38.4 points and they will now face second-placed Leeward Islands (25.6 points) in the Final play-off. This match will be played at the Arnos Vale Ground, starting on Thursday. The third placed play-off will match Guyana against Jamaica at Park Hill, while the fifth place play-off will be between Trinidad & Tobago against Windward Islands at Cumberland. This will bowl off on Wednesday.

Playing at Cumberland: After several rain interruptions on Day 2 which washed out the entire morning session, 60 overs of play was possible in the post-lunch and tea sessions which ended with the Leeward Islands 49-3 in reply to Trinidad and Tobago’s 1st innings total of 251-8 declared. This status of play represented a continuation of the young Trinidad side’s fightback from 53-4 en route to ending day 1 on 122/5 (62 overs). When afternoon action commenced Trinidad and Tobago progressed from an overnight score to 171/6, before losing their first wicket on the day, that of opening batsman Nick Ramlal 47 (245 balls, 2×4) for a very patient innings that held Trinidad’s innings together. Ramlal shared in a 49-run sixth-wicket partnership with Veeran Batchu.

Playing at Park Hill: The Windward Islands although they were bowled out for 152 on opening day, can thank their bowlers for keeping them in this contest against table leaders Barbados. In the limited action on day two, the Windwards were led by a solid spell by new-ball bowler Tarique Edwards (12-5-18-3) that has restricted Barbados to 90-5. 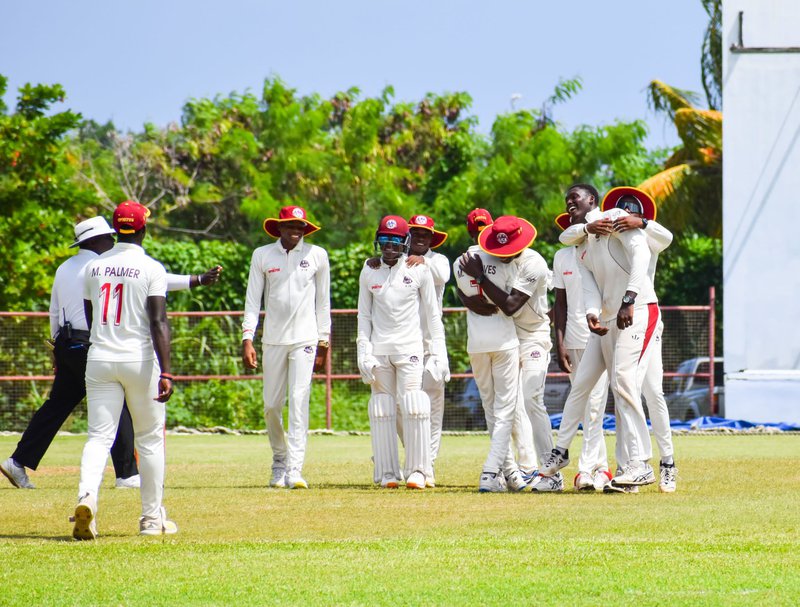