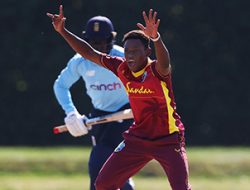 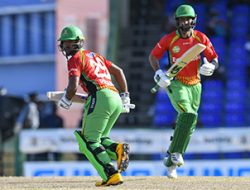 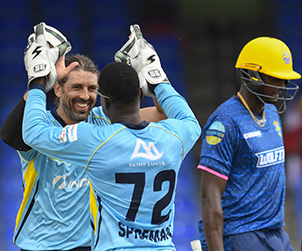 A superb bowling spell from David Wiese helped Saint Lucia Kings gain their fifth win of the 2021 Hero Caribbean Premier League (CPL) and end any chance of the Barbados Royals qualifying for the semi-finals in the process.

The Royals won the toss and captain Jason Holder chose to field first, which looked like a good decision as the Kings lost two wickets in the Powerplay to the superb Mohammad Amir. However, Saint Lucia Kings captain Faf du Plessis once again produced a masterful performance, scoring 84 runs to take his side to a commanding 175/6.

Despite a strong start in reply, the Royals were sent into disarray in the ninth over as Wiese took three wickets, Johnson Charles, Shai Hope and Glenn Phillips all fell within five balls. Despite a late fightback from Holder and Hayden Walsh, it was not enough and the side finished on 154/8.

Saint Lucia Kings had reshuffled their batting order for this game, with Mark Deyal opening, yet it was to have little effect as both Andre Fletcher and Deyal were back in the pavilion after three overs, with Amir once again getting early wickets. It was left to du Plessis to build a big score, scoring 84 from 54 balls, partnering effectively with Tim David. A late cameo from Keemo Paul with the bat saw the Kings reach a substantial total.

The Royals lost Kyle Mayers in the third over but rebuilt with Charles and Hope looking confident at the crease. However, after three wickets fell in an over, they were unable to recover, losing more wickets as the run rate increased, notably Holder, who was looking dangerous on 34 runs off 24 balls. A rain delay saw their innings reduced by one over, and Walsh resumed play with a few boundaries to keep his side’s hopes alives. However, Wiese struck again and took Walsh’s wicket in the 19th over, his fifth wicket of the game,  giving the Kings the crucial win.

With this loss, Barbados Royals can no longer qualify for Tuesday’s semi-finals and will be playing for pride when they face the Saint Lucia Kings once again in their final group game tomorrow.