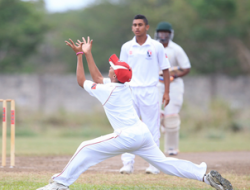 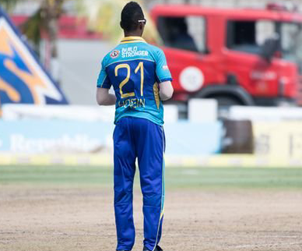 On a day when a sparse crowd of approximately 5,200 cast doubts on the financial viability of the CPL making future visits to Florida, Jamaica Tallawahs wouldn’t mind staying away. Though Tallawahs’ new owner is exploring the possibility of shifting some of their home games to Lauderhill, the defending CPL champions are winless after three matches at the venue, falling to Barbados Tridents by 12 runs on Saturday.

On a pitch where getting in wasn’t easy, a series of nuggety contributions, led by Shoaib Malik‘s 33, took Tridents to 142 for 7. Though Lendl Simmons produced a half-century in reply, there was little support down the order, and Tallawahs finished on 130 for 6.

Kesrick Williams, Tallawahs’ highest wicket-taker last year, opened this season’s tally early. Off the last ball of the Powerplay, Kane Williamson mistimed a pull straight to Jonathan Foo, who was inside the circle at midwicket.

As he celebrated, Williams mimed, pulling an imaginary notepad out of his trouser pocket. He then flipped through the pages in his palm before making a mark for Williamson’s wicket and putting the notepad away. Then, in the 18th over, Williams dug the notepad back out of his pocket when Shoaib Malik holed out to deep midwicket.

Powered by Lendl Simmons’ rapid start, Tallawahs looked like they would cruise in the chase. Wayne Parnell bowled erratic lines in a 15-run first over. Parnell sent down three leg side wides, and then overcompensated to offer width. Simmons carved two short and wide balls behind point for fours, and in between, flicked one off his pads through fine leg.

Coach Paul Nixon was full of praise for Simmons in the buildup to the first match. After working over Parnell in the first over, he was similarly at ease against Tridents’ spinners, hoicking Akeal Hosein straight back for six in the sixth over. He ended his Tallawahs debut, having top-scored with 53 off 46.

Kumar Sangakkara batted at No. 3 last year for Tallawahs, but with the Gayle-Walton opening tandem gone, the new captain walked out to open the batting. He only lasted one delivery, slicing Ravi Rampaul to point.

Overstepping was a problem Mickey Arthur had to deal with early in his tenure as Pakistan coach, making him lose what little hair he had left. Wahab Riaz showed the problem hasn’t been cured entirely.

Wahab showed clever thinking by working Andre McCarthy over with the short ball before bowling him with a full and straight ball in the seventh over for 15. What was not so clever was Wahab’s inability to keep his foot behind the crease, as proven by replays, allowing McCarthy to return to the crease and take his second-wicket partnership with Simmons to 62.

Wahab very nearly cost himself another wicket at the start of the 19th over when Williamson’s outrageous leaping catch at deep midwicket accounted for Rovman Powell. Replays were touch and go as to whether or not Wahab had any portion of his foot behind the line. The third umpire gave him the benefit of the doubt, though Tallawahs coach Nixon was visibly frustrated with the decision.

Tallawahs had just suffered a crucial blow when Shakib Al Hasan was adjudged lbw to end the 13th over to make it 82 for 3, leaving the equation at 61 required off seven overs to win. With Simmons well-set on 53, they needed him to kick on but he fell on the first ball of the 14th in embarrassing fashion.

Simmons sliced Shoaib’s first ball to short third man. Powell was fresh at the crease and the pair’s lack of chemistry showed in a dicey call. The throw to wicketkeeper Nicholas Pooran drew him away from the stumps to allow Powell to make his ground.

Simmons was in the middle of a leisurely stroll down to the other end, not expecting a throw to come his way. The alert Pooran caught Simmons napping and whipped a relay to the bowler’s end, the throw hitting the stumps with Simmons a yard short. Pooran celebrated his sneak attack by doing a handstand. The Tallawahs innings never regained momentum.