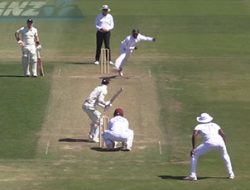 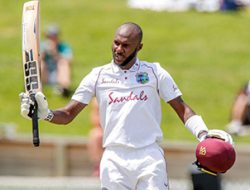 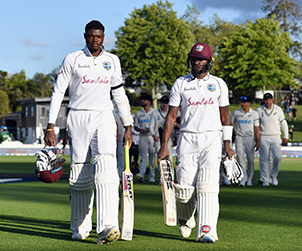 Rocking on 89-6 in their second innings in the final session after being asked to follow on by 381 runs, the visitors were lifted out of the doldrums. Blackwood has been excellent with 80 not out off 98 balls and Joseph, who played with instinct and bravery on 59 not out off 73 balls.

Together, they forged a precious unbroken seventh wicket stand of 107 which frustrated the five-pronged seam attack employed by the hosts, forcing the contest into a fourth day on Sunday at Seddon Park in Hamilton.

Arriving at the crease at 27 -4 and with the innings only 49 balls old, Blackwood chose attack as the best form of defense, hammering nine fours and two powerfully struck sixes.

Joseph, meanwhile, punched nine fours and a six in a composed maiden Test half-century. The partnership was badly needed after West Indies, resuming from their overnight 49-0 without loss were dismissed for138 in their first innings just over an hour after lunch.

Captain Jason Holder battled to an unbeaten 25 and Blackwood, 23. However, once West Indies lost five wickets in the first session to slip to 79-5, they were always facing an uphill battle to avoid the follow on

West Indies were undone again in their second turn at the crease as the top-order again found batting quite challenging. At tea, the score they slipped to four down for just 30 and shortly after the break things pumped to 53-5.

Blackwood attempted a rescue effort in a 36-run, sixth wicket stand with Holder, and when he was removed, Joseph entered and has so far played the best innings of his career.